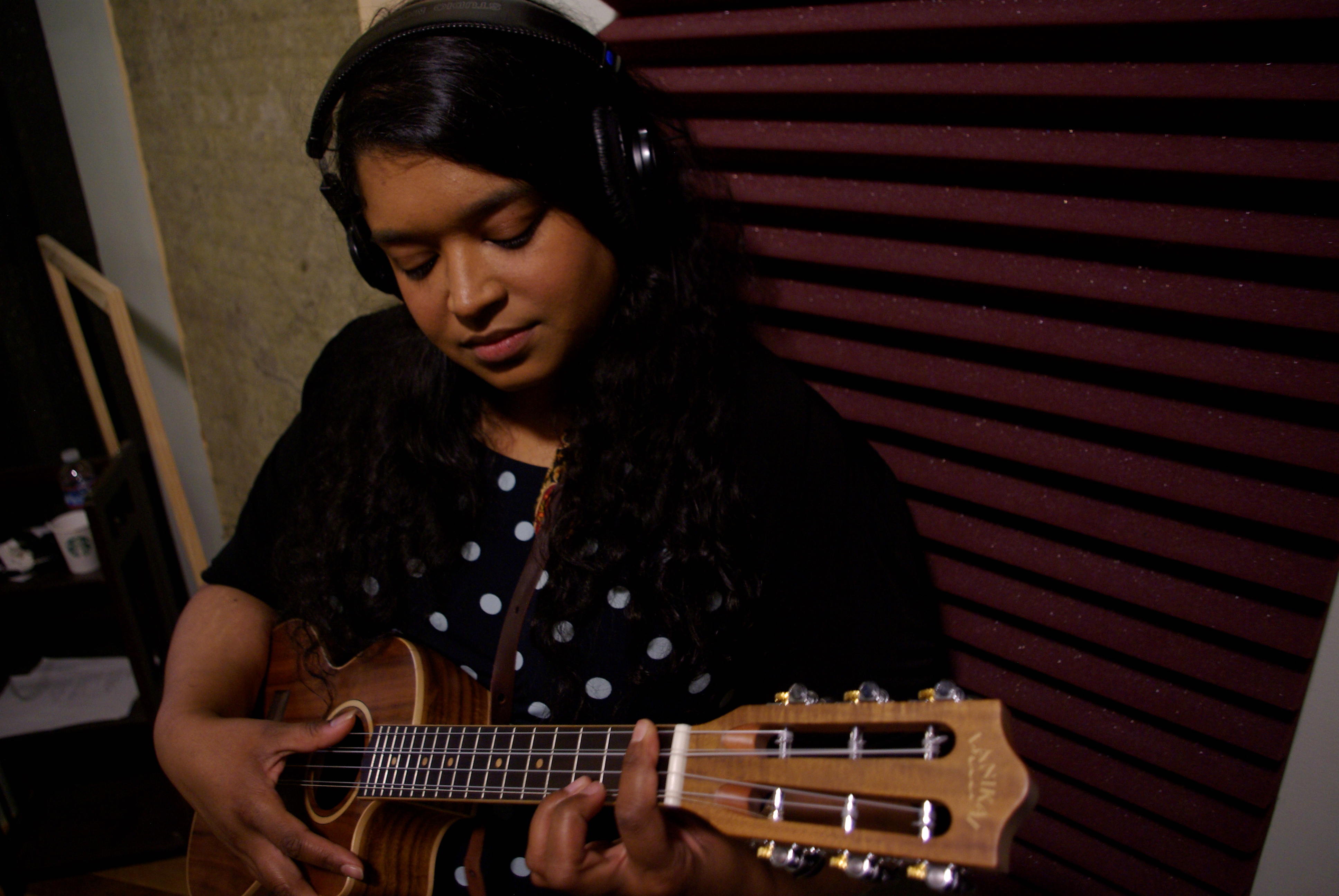 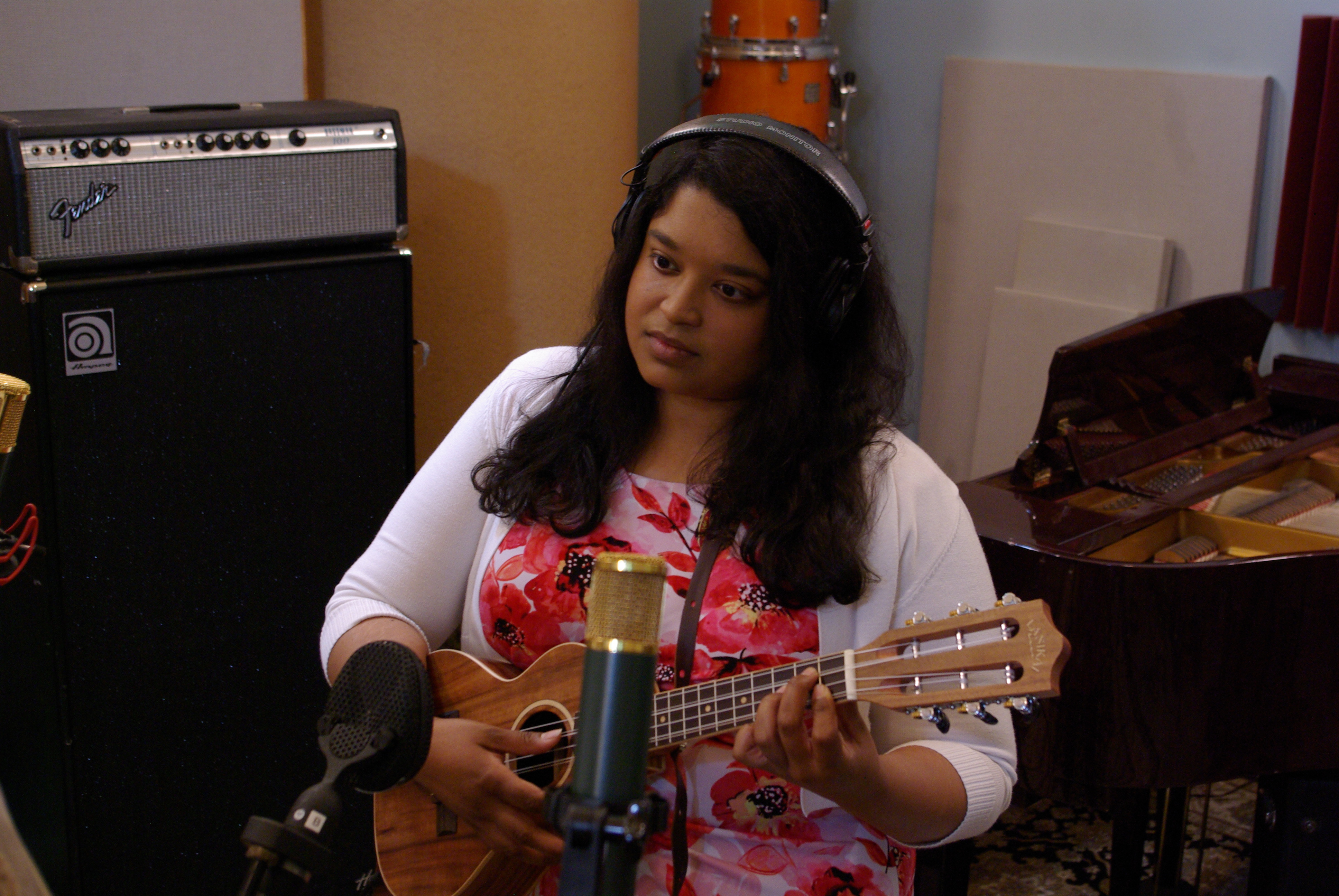 Bio: Champagne Honeybee is singer/ songwriter, Rani Weatherby, her trusty ukuleles, and talented backing band.  Their sound is a mix of contemporary jazz, blues, folk, and ukulele soul.  In June of 2014, they released an EP of original music called “No Love Songs”.  The CD release concert packed Rock City Cafe in Snohomish.  They rounded out the year playing acoustic showcases at The Benbow Room, a rockin’ set at The Evergreen State Fair, funk jams at Nectar Lounge, comedy nights at The Rendezvous and Feedback Lounge, a sold-out Jazz Christmas house show, and many private events.

2015 brought new experiences and opportunities, including a Spring tour with stops in Moorhead, MN, New York City, New London, CT, and Philadelphia, PA. They taped a performance for the television show, “Band in Seattle”, which airs on the CW Network, as well as a live performance on Seattle’s King 5 Morning News. Performances also included the Seattle Mayor’s Arts Awards Ceremony at Seattle Center, Seattle Music Insider’s photo exhibition at the Triple Door, Northwest Event Show, and collaboration with Prince’s former keyboardist, Dr. Fink, at the Sea Monster Lounge.  A new EP, entitled “Once in a Lifetime”, was released on April 1st, 2016. The year ended with another East Coast tour, and radio and television appearances.  2017 kicked off with a newly acquired partnership with KHS America, as a spokesperson for their new line of Lanikai Ukuleles. Champagne Honeybee’s first album was accepted into Seattle Public Library’s online music catalog, and they were voted Best Band For Hire in the Best of Western Washington competition.

Rani achieved a life-long dream of performing in India, in February of 2018.  She put on a concert through the US Consulate in Kolkata, and was featured on the cover of the Calcutta times.  Upon her return, the story of her musical and personal journey was featured on King 5’s Evening television program. She got the band back together in April of 2018, to record an original radio commercial for Verity Credit Union, which aired on Seattle’s Movin’ 92.5 FM.  The band is currently recording a full-length album, which is scheduled for release in 2019.

Champagne Honeybee has a heart for charitable causes and has performed at fundraisers for The Dave Thomas Foundation for Adoption, WACAP adoption agency, Concert Across America to End Gun Violence, the YWCA of Snohomish and King County, and rhino conservation programs for the Woodland Park Zoo.  Stay tuned for upcoming projects and events!

“My 6-string acacia tenor ukulele by Lanikai is just a much a part of my band as I am. The rich, full sound is the perfect accompaniment to my voice, whether I’m performing solo or with my backing band. It’s perfect for live concerts, studio recordings, and media appearances. It not only sounds great, but it looks great as well. I get compliments and questions about it everywhere I go. The built-in tuner saves precious time, and helps me stay in tune during long gigs. The 6-string sound has changed the game for my live performances, giving me a bigger presence. I think that there are a lot of misconceptions about the ukulele, particularly people viewing it as a novelty instrument, or even a toy. This is a quality instrument that is ideal for any genre. I’ve used it to play jazz, blues, funk, and even rock. My goal is to shatter the stereotypes, and show the world just how versatile the ukulele can be. Lanikai ukuleles make it easy to do just that. I would recommend them to any artist who looks for quality, durability, reliability, and beauty in the instruments that they play. .“